Mom came to my house for Dinner and she walked up the steps, slowly. Though still tied to her wheel chair, she had her second dinner at our house, since her move to Philadelphia. Dawn has come to the conclusion that the issue and concept of time travel started with someone living with dementia. We are never sure what decade is being reflected in her conversation, but eventually a name or and event will point to a date that is in the distant past.

My mother may be finding her own way of dealing with the fact that she is the elder in her family. She continually asks about the whereabouts of those who have left this life and in some ways have left her alone. She is the oldest of the two siblings who remain.

With the issue of travel a bit easier, Cousin Lisa continues to try to organize her father Melvin, in DC, to get up to Philadelphia to visit his sister.
Posted by Richard Stewart at 9:28 PM No comments:

I had difficulty finishing this entry in the blogosphere. On one side of my family I am officially an elder. A week ago Friday, we received notice from my cousin David that his mother Eleanor had passed away. The Stewart’s, this branch, is now down to the three male cousins. Though I’m the one in the middle age-wise, I am the only one with Children. How is it that I look in the mirror and I still see an older version of the newspaper boy, not an elder?

This is the fourth death in our family this year, though this may be the one that was expected. Eleanor had been in a nursing home for several years with Parkinson’s. When I visited her communication was difficult, but her eye spoke volumes. David, her younger son has also been diagnosed with the same ailment.

I did not expect my sabbatical to highlight my own growing older in such stark fashion.

Posted by Richard Stewart at 10:18 AM No comments:

CHOICES - Last Wednesday, I had unique choices, both related to . With season tickets to ’s Basketball, I also have the schedule for ’s Basketball. That evening the Women played the Women’s team from the . Now I’m not a hometown fan of the Rockets, but I met a former player Kristen Konkol, who is serving as an ELCA Mission Coordinator for the South African Young Adults in Global Mission Program, along with her husband Brian. She surprises many folks when she walks into a pickup game as the last picked.

I did though have another South African option. The Soweto Gospel Choir was in concert at the in . It was my first trip to the new home of the Philadelphia Orchestra. [It was an obvious choice.] As Dawn and I waited for the concert to start, I noted how the choir was received at home after receiving their first Grammy, because earlier this week they had been nominated again. Dawn wondered out loud whether I could pronounce all the names of the Choir members. I started and stumbled on the ‘clicks’ in Xhosa, but I got through the list. The young man sitting next to me started chuckling. It seems he is Xhosa and a graduate of Penn and a former resident of . He is ready to go home, but he has to convince his American ‘white’ wife that is beautiful and cosmopolitan. We had an interesting conversation at the intermission.


The news today is about South African Choices. I may have typed about the schism that was beginning to appear in the African National Congress, but today it was reported that the Congress of the People, was organized today. The report here is that this new multi-ethnic party may have the political clout to be a major challenge to the ANC. I will view from afar.
Posted by Richard Stewart at 9:28 AM No comments: 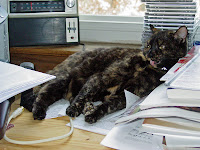 Shedding and Shredding – Spending time at home has been a bit unusual for Bella Madonna. She’s the family member I have not mentioned yet in the blog. She is the quietest member of the family but she makes sure that she is noticed, most especially when either Dawn or I want to be busy at the keyboard. Her four paws seem never to work in harmony with one another. But for the one on sabbatical, I now command her attention. But shedding is not just about her fur, it is also the accumulated detritus that accumulates when one is working on a degree, a book, or is out of the country for six months.

The deadly combination of my completing a degree and then six months later heading to South Africa has given my home office the look of a stuffed storage closet. Since returning, I’ve been filling a recycling bin with old magazines and mailings and a waste basket of shredded paper each week. Most of my friends know that I’m a collector, that is, I am not a pack rat, I’m just an untrained archivist. So going through old papers and is like pushing the delete key on personal data on a computer. It is done reluctantly.

In going through the material I found mail from an old friend, “the original poor humble parish priest”, Rev. Dr. James Gunther. Dr. Gunther has a PhD from Harvard in Sociology, and his most recent mailings also note that he is a futurist.

What he does for me is send a package at unscheduled intervals with tidbits of his lived history as an African American Lutheran clergyman. Sometimes the materials are repetitive, but there is usually one nugget that opens up a line of history about which I may have heard, but did not live. Near the end of my sabbatical proposal, I said that I would work on my research in the history of African American Lutherans.

Along with two large packets of materials sent while on sabbatical there was one lone envelope. In it was a tribute to one of his colleagues, one of my colleagues, one of my elders. Just a month ago, some one asked me about Vernon Carter. I had not heard about Vernon for at least four years, but I assumed that he was still living. I was wrong, he had died in 2007. Rev. Vernon Carter was the long time pastor of All Saints Lutheran Church in Boston, MA. He was a pivotal figure in addressing racial inequality in the Boston Schools in the 60’s. [http://www.boston.com/news/globe/obituaries/articles/2007/08/25/rev_vernon_carter_at_88_held_vigil_to_fight_racial_inequality_in_schools/?page=1]

Vernon at five foot was a giant in persuasion. He could easily make this seminarian feel insignificant by his grasp of the way that social ministry was to be done in a society that did not readily embrace change. He was giant enough to make the Boston Globes annual review of notables who had passed away in the previous year. Granted it was on the seventh page, but he was recognized and remembered. [http://www.boston.com/bostonglobe/obituaries/articles/2008/01/01/with_grit_or_grace_they_left_their_mark/]

Like his idol, Martin Luther King, Jr. he practiced non violence, but no matter where found inequality needed to be addressed. His advocacy in later years included assisting Ethiopian refugees and those, who like him shared black and Native American ancestry.

It’s not just shedding and shredding, but the rereading that moves one into sharing and much to my wife’s dismay, saving.
Posted by Richard Stewart at 10:19 AM No comments: