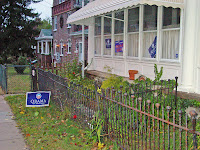 The Deed is done; the Vote is cast. Mom wondered on Sunday night why she should vote. My only retort was that she spends a lot of time in front of the television, and she has probably heard more about the elections than I have. [Never could get her on the internet.] She said she would look at it later. So first thing on Monday I showed up with her absentee ballot again. We talked again about her move to Philadelphia, and she noted that she didn’t know most of the people on the ballot. I suggested that she vote for the one at the top. With her vote on the ballot and her signature in place I drove to City Hall to cast my absentee ballot.

I didn’t think that I would have to spend money this time, but I forgot about parking in downtown . It took an hour and $11.50 but I’ve cast my ballot, that's only a fourth the cost of my primary ballot which didn't get counted. Now I can hang up the telephone every time I get a robocall. 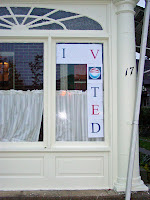 Surrounded by two neighbors who had Barak Obama signs in their yards when we got back from , we haven’t put in a yard sign. But I’ve got the first I voted sign.
Posted by Richard Stewart at 3:42 PM 12 comments:

For those of you who have read the blog from its experiences, know that there was a time when I didn’t think my vote [in the primaries] would count. As I listened to US news, I finally sent the application form my absentee ballot on March 11th. On April15th it arrived and within an hour the ballot and $45 of postage was on its way back to , hopefully to arrive before the 18th. IT DIDN’T MAKE IT. When Dawn voted on the 22nd there was no record of my vote arriving on time. [By the way a second ballot arrived on the 18th of April.]

If you’ve heard of irregularities in the voting process in the , they are real. Hopefully they are not numerous, but I’ve now become one of those irregularities.

As many of you know my mother has been moved from to . Upon her entrance the interview with the Philadelphia Council on Aging asked whether I had registered to vote in PA. I said not yet. When asked if she wanted to vote, my mother [a long time Democrat] asked why that was important. Dementia does play tricks with what used to be a sharp mind. But before the deadline we did get mom registered to vote and then about two weeks ago we requested absentee ballots. One for her to keep from having to move great distances and one for me as I would be driving back from the of Religion in . I didn’t want to risk not voting again.

Well this morning I called to ask how soon the ballots might arrive. I was told that my mother’s ballot had been placed in the mail on the 22nd, but there was a problem with mine? It seems that my request for a ballot in was still sitting on their system. The application for a ballot to be sent to my home was not readily available, though both of our applications were sent in simultaneously. For those at the LTI in KwaZulu Natal, you might see a piece of mail from the Philadelphia Board of Elections. Do not send it back. The vote will be cast and this time my vote will be counted.

Colin Powell was to be the inspiration for this reflection on the voting process after Sunday’s announcement, but things change. I’m going to be in downtown on Monday morning to cast my ballot before I go to . Irregularities be damned.
Posted by Richard Stewart at 8:42 AM No comments:

In this year Dawn was able to claim “family” with our visit to and the discovery of lineage and grave sites.  Dawn is oldest of six, her sister is they youngest, with four boys in between.  This year, has brought the loss of immediate family with the death of her oldest brother Robb in April.  Today we received notice that her second brother Ray died overnight after having life support removed on Tuesday.  Youthful decisions involving drugs left them both with Hepatitus C.  Both had received liver transplants which eventually failed.  Dawn and I are on the way to for a Memorial Service on Saturday.  Please remember the Cartee Family in your prayers.

Posted by Richard Stewart at 6:29 PM No comments:

In reflection, returning to the US seemed like an adventure into every element of the medical enterprise, as formed in the United States. After being gone for six months, I had prescheduled my own medical checkups, but as soon as they were done, I was on my way to Ohio to check on my mother, who had been moved into a rehabilitation facility adjacent to her independent living apartment.

Needless to say she was glad to see me. She had shared with her friends that the longer I stayed in Africa, she didn’t think she would see me again. The competent and caring staff didn’t offer a glowing picture of Charlesetta’s progress toward returning to her independent living. They suggested early in July that I might have until early September to find a place for her in a skilled nursing facility.

Knowing before I left for South Africa that mom’s financial resources were nearly diminished, the issue was to find a facility to take her that accepted Medicaid. It was an easy decision to look only in the Philadelphia area. Looking at facilities within walking distance of our home, Germantown Home is 3-4 blocks away and halfway to the seminary where I work. Our health care system determined that I did not have until September, but had to move her by late July. So on August 6th, my mom and I drove to Detroit and we flew to Philadelphia, where she now lives. The only difficulty is that her memory of any move is lost, so every time I enter her room she wonders when I arrived.

There are days of sad feelings of her being lost, but there are moments of high laughter of experiencing her explore her new environment. One morning she got her wheel chair to the elevator and was bound and determined that she was going to work. When I asked her how old she was she said 55 and that she had to get to the ‘hospital kitchen’ and she couldn’t understand why we wouldn’t let her. She was sure that she had gotten to the hospital ‘where she worked.’ Smiles appeared when I told those surrounding her that she had been a food service supervisor in a hospital for 27 years.

Someone noted that there might be a change in my schedule. I responded that there was a change in lifestyle. I use to see her every 4 months, now I can see her daily. But after two months her spirits seem to be much better.
Posted by Richard Stewart at 6:28 PM No comments:

Notice the Change in Font. I'm playing catch up. It's been a long and emotional three months.

Leaving South Africa was like leaving a piece of me behind. It was not a permanent placement, but one of my snapshots in life. It was a snapshot that took a while to develop, but like any strong snapshot, it lingers enough to encourage one to look again. I’m sure that there will be another opportunity to be once again in 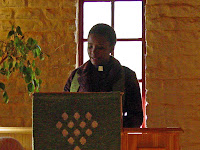 the southern tip of the African continent. Jennifer Moenga had returned home to Botswana from LTSP and was a part of the contingent of pastors at the educational event in Botswana, and she was the one who arranged for the visit to the game park. In receiving, I have learned that I need significant lessons in hospitality.

Then, it is was off the to land of the midnight sun. Dawn had been doing a good bit of family lineage research, so we knew that her grandmother had come from Karlskoga, Sweden at age 17. Her grandfather had come from the same area at age 4. So from midwinter in South Africa to the midsummer nights in Sweden we flew. Nearly 3 hours from Stockholm a bed and breakfast, “Krey Hotell” provided a base 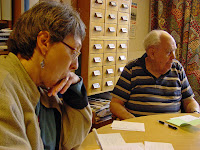 of operations. In Karlskoga, the library had an office for a volunteer who was tracing the history of those who had left Karlskoga to emigrate to America. Via email, Dawn had shared her research and had questions about her grandparents. Kjell Nordqvist who had to be in his 80’s had done the family research for Dawn tracing her roots back to 1530. With some clues from Kjell we went to Dragerfors, the bottom of the lake at Karlskoga and went to the church yard. Dawn went down to the south 40 and wandered for nearly and hour. Lazy me stayed near the old church and new church. I had about three more rows to go when Dawn reappeared and wondered if we were done. She joined me and about 3-4 head stones later we found the family plot for the parents of her maternal grandmother. What a find.

Her grandfather’s father had been recruited to com 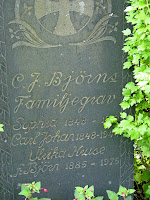 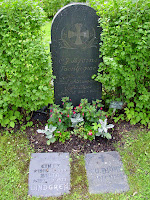 e to Worchester, MA to work in the wire factory that was making barbed wire for the settlement of the west. At a later date, they moved to Cleveland to be a part of the steel and iron ore processing there. But we were able to see a preserved home of what the workers at the Balfors Foundry were offered as a part of their employment. Two rooms for your family, of sometimes up to 8 or more. A profound sense of belonging slowly emerged from my wife of nearly 40 years.

The last 3 plus days we “toured” Stockholm. Churches, museums, and the mid-summer night celebration took our time and attention. It is truly weird to have the sun go down at 11 pm and rise at 1:30 am. I got a little confused one night.
Posted by Richard Stewart at 9:05 AM No comments: