What do you say when they are ready to vote on a new pastor? 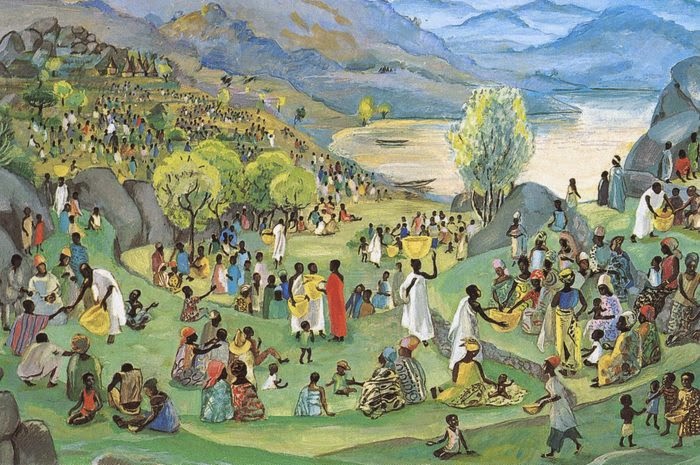 I hope that this sermon paves the way for shared ministry.  The audio can be found at:
[ https://soundcloud.com/tigerowl/pentecost8-2014 ]

JESUS MAFA. Jesus multiplies the loaves and fish, from Art in the Christian Tradition, a project of the Vanderbilt Divinity Library, Nashville, TN. http://diglib.library.vanderbilt.edu/act-imagelink.pl?RC=48287 [retrieved August 4, 2014].

Have you ever seen a hungry mob of 35,000 teenagers descend upon a downtown on a weekday night when all of the businesses have closed at 4:30 pm or 5 pm?  Trust me, It’s not a pretty picture.  Have you ever heard of a Mc Donald’s or Burger King running out of food?  Fancy restaurants suddenly becoming reservations only or not admitting guests because, shhhh, they were all teenagers…..  IT’s a stunning fate in the midst of the market economy of the century changing year of 2000.

Though the planners had conversations with the convention planners and hotel planning staff, prior to the arrival of the first 35,000, these business people of St. Louis were thoroughly unprepared.   The information that is shared when the Evangelical Lutheran Church in America books a Youth  Assembly starts with the fact that they don’t count rooms or beds, they count the pillows, for our youth groups are assigned four and five to a room.  This is a distinct variable in entertaining youth, in terms of how many a city and their hotels can entertain, the spirited hungry hoards of youth that the ELCA can bring to a city.

The twin towered Marriott hotel I was assigned to, assured me as Hotel Pastor in Charge, that they were ready.  I knew early in the day when the buses of youth began to arrive and they were having trouble getting all their rooms checked in that we were in serious trouble.  I didn’t think it could get worse.  But it did.  After the evening program at Edward Jones Dome, home of the St. Louis Rams, the church youth of the ELCA excited by the music and the presentations at the event Titled “Dancing at the Crossroads” trouped back to the cluster of hotels in downtown St. Louis and to buses for the suburban locations.  Back at the hotel I asked the management staff if they were prepared for our youth to return and order evening snacks.  They responded in the affirmative, but in the hour and a half after the final event at the Dome, the snack bar was empty the grills and restaurants were out of food and the youth were moaning that there was nothing available to eat……Fortunately we did have a band in our hotel which continued to entertain the hungry, moaning, energized youth until our mandatory midnight in your rooms curfew.

I know the fears expressed by the disciples in our lesson for the day.  In the middle of a city across the street from the St. Louis Cardinals this Marriott Hotel had become a “deserted place, and the hour is now late;” and I could only “send the crowds away to pray and to their bedrooms, so that they could get rest and in the morning go into the villages and buy food for themselves."  Ultimately I knew that these youth of America were not going to starve to death, though many of them voiced that concern.  Perhaps I didn’t have enough faith, but I’m not sure that I would have heard Jesus words when in scripture Jesus said to them, "They need not go away; you give them something to eat."  The moans of the 600 youth in ‘my hotel’ would have drowned him out.

Did you notice the subtle difference in what the words say in scripture and the way we talk about the miracles of Jesus?  Almost universally we say that Jesus fed the 5000 or 3000, the number changes from Gospel to Gospel or even chapter to chapter.  It was a working of the spirit that was important to the early life of the church, thus the story is a shared experience.  In today’s lesson: 14:16 Jesus said to them, "They need not go away; you give them something to eat."  14:17 They replied, "We have nothing here but five loaves and two fish."  14:18 And he said, "Bring them here to me."

Please note who does the feeding.  Jesus says that the people do not need to go away.  Jesus instructs the disciples to feed the people, YOU GIVE THEM SOMETHING TO EAT.  While the disciples plead that they have limited resources, 5 loaves and 2 fish, Jesus follows with a simple instruction, “Bring them here to me.”  Like any dinner party he invites the guest to take their seats, he says grace and blesses the food, and instructs the disciples to act as their waiters and distribute the food.
There are at least two lessons here.  First there is recognition of how to both see a need and address it. For Jesus when he sees the sick, he heals. When he sees the ignorant, he teaches. When he sees the demon-possessed, he exorcises.  When Jesus sees disciples noting a need, he challenges them to go to work: “You do something.” (Or, more specifically, “feed the hungry.”)  Quite rightly it would have been easier if Jesus had just sent them away, but they were the ones who recognized the need, and Jesus was, in one way instructing them that, should they see a need, then the task is not to pass the need on to someone else, but survey your own needs and address the need.

Were the disciples looking for a feeding method that did not involve a great deal of work on their part?  There certainly could have been other ways of feeding the hungry that didn’t involve so much work by the disciples. Jesus could have miraculously made the people’s hunger pains disappear. If Jesus was going to miraculously make food appear – why not have it appear in the stomachs – no work for the disciples and no garbage to clean up. Jesus could have waved his hand and the magic words, “Colonel Sanders,” and every family would have their own bucket of chicken right in front of them.

Have you ever thought about how much work it would be to distribute food to 5000 men, besides women and children – and then to clean up the mess? How significant is it that there were 12 disciples and 12 baskets of garbage picked up at the end?  Was Jesus teaching at every step along the way?  Was this a way for one more lesson on the observation and the practice of being a Jesus follower?  Was Jesus just demonstrating that it is possible to use what seem to be meager resources to address the problems that face the Christian Community?  For Jesus being a disciple was more than being a learner, but a worker.  In the end after sending the disciples out into a boat after the leftovers are gathered, he did exactly as the disciples had suggested at the beginning of the parable, “Jesus sent the multitudes away.”

Two learnings from within the lessons and parables: 1: No one leader does it all.  Rev. Silas D. Daugherty, Rev. Paul S. Wagner, Pastor Robert J. Mayer, Pastor Daniel Shook, Pastor William Heisley, and Pastor David Shaheen did not lead this congregation alone.  Each of them has people who worked alongside of them.  They were not only disciples of the congregation, but of the Christ who redeemed them and died for them.  Some of those partners in ministry were the ones who signed the charter in 1921, but some of the partners in ministry are the people sitting next to you in the pews.  How many of you have played any role in the life of this congregation beyond just sitting, singing and praying on Sunday morning.  Don’t be bashful.  Disciples are not bashful people; they are the ones who say loudly and proudly that they are a child of God and a disciple of Christ.  They are the ones who say to others I belong… to Christ Lutheran Church.   They are the ones who invite others to join them at Christ Lutheran Church.

As this congregations takes the initial steps toward new leadership, no that you are not the first ones to do that, even in this location of God’s outpost for feeding those who are hungry for the food and the word.  But you are the ones who are to be called upon to introduce your new leader to your friends, families and neighbors.

Lesson 2: No leader accomplishes the ministry of the Gospel without the support of the members of the congregation.  We made commitments in the vacancy to fund a new furnace for ministry in this building.  We agreed to reduce our debt load.  We will agree to support financially a change in leadership in the congregation.  And all through these years we have said that we support the work of the Community Outreach Corporation which uses our building for many of their services.  You see nothing stops.  The ministry of the gospel continues even during the vacancy all by the grace of God and your support.  None of that stops.  It just gets more interesting, to us all by the Grace of God.  AMEN.

Thanks to Brian Stoffregen.

Posted by Richard Stewart at 10:49 AM No comments: