Apparently my absentee ballot didn’t make it. When Dawn voted they had a list of those who had voted absentee. My name wasn’t on it. Since I’m near and there are a number of Zimbabweans on campus, I could generate a heated conversation on the ways that elections can be rigged and votes being meaningless, but I could have voted before I left the states, my bad.

This week I also had deep appreciation for David Wartluft and Karl Krueger. Our Librarian, took vacations days and tied them into two holidays to be able to be gone from tomorrow to May 5. I had assignments that students needed to read. Tuition grants at the seminary do not seem to include a book allowance, and students must make significant use of the library to complete assignments and prepare for class discussions. Even though I brought two books for each of my students, the recommended readings which are on reserve in the library still get a lot of use on the copy machine, with students asking which chapters are the most important.

So I volunteered to keep the library open for a few hours. With two other faculty, the Tönsings, we have finished out this week and will have the library available for students for the two non-holidays next week. The student computer staff person also asked me to keep the anti-virus upgrades going while he is away for the holidays. A little knowledge is a dangerous resource.

Posted by Richard Stewart at 7:21 AM No comments: 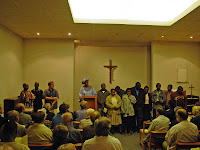 Last week we had graduation. It’s different here. The and Theology noted the graduates who received the Bachelors of Theology, the Honors Degree, the Masters of Theology and the Doctor of Philosophy at a special convocation at the LTI. [See picture above] On that same Tuesday evening, the students who had completed the ministerial studies courses earlier, were also honored. These folks had been assigned to congregations by their bishops. The Convocation the Gunther Wittenberg Lecture, which honor 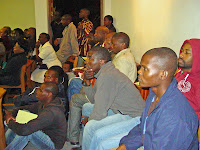 s a long time faculty member of the LTI. The Speaker this year was a retired Professor of Systematic Theology Klaus Nürnberger, who also taught at the LTI and is still doing research and writing on the relationship of Science and Theology. Nelson Rivera would have sat on the floor like many of the students. [see second photo]

University graduations were yesterday. The main event was held at the Territorial Fair grounds in the center of Pietermaritzburg. Families came and celebrated the accomplisments. Yet for the undergraduates, classes continued as if there was nothing special going on. Maybe its because there are holidays this week and next, which means some students will be taking a week off, as will some faculty members, and squeeze out another holiday. This time I’m staying put.

Posted by Richard Stewart at 6:50 AM No comments:

Yesterday during the Stewardship presentation, I had a reflective moment where I wondered out loud whether I would have taken a 5 month teaching experience away from my family, if, I had known all that would take place during that five month period. My initial worries were about my mother, who turned 85 on the Ides of March, but she seems quite fine thank you. Secondarily I was concerned about her brother Melvin, who was settling into assisted living, but he too is doing quite fine.

What was not on my radar screen was the death in Holy Week of my father’s brother Melvin. Yes, I have two uncles named Melvin. A stroke comes suddenly, and when you live alone, it gets complicated rapidly.

Dawn is the oldest of six, and today, Dawn’s brother, Robb who did receive a second liver transplant died. This weekend she is on her way to for the funeral. My time in July will focus on Melvin’s affairs. It is an interesting question, knowing what I now know, would I have signed up for five months? Peace.

Posted by Richard Stewart at 6:30 AM No comments:

I thought I would be writing about the workshop that I led for the pastors and lay persons on Stewardship. I got back to the office after the six hour workshop, dead tired. Yet walking in my office door, I had to stop over an envelope. IT was my absentee ballot for the election. I had sent an air mail letter on the 11th of March. Starting on April 2nd, I try not to be a fool, I had looked in the mail every day through yesterday, hoping that the ballot would arrive in time to be sent back. So there on the afternoon of April 15th, tax day, there it sat on my floor and it had to be in by the end of business on the 18th. What’s the chance, that my vote will be counted? Quickly marking the ballot on both sides and sprinting to the Post Office, I shelled out R358.86 [about $45] to courier mail that ballot back to . Now the question is whether it will arrive before the close of business on the 18th. Somehow it seems unfair that the election is on the 22nd and my ballot had to be in the Board of Elections by the 18th. This is the most I’ve ever spent on an election, and it’s only the primary.

PS. On Friday the mail delivered another ballot. Is Philly copying , where they vote early and often? But then Friday is the 18th. 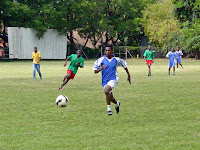 I’ve been overdosing on football, not the version, but the international version. The TV finally figured out a way to turn itself on an hold my interest. It was the news of or the lack of it after the election and the English Premier League, the Professional Soccer League of South Africa and the National First Division in . As the season get close to an end the English Premier League games are featured on TV. Each weekend at least two of the PSL games are televised and locally the Pietermaritzburg United Football Club won the Coastal Division. With the stadium a 15 minute walk from campus, and the admission free, this became an easy choice. Next they play in the championships to see if they can move up to the PSL for the next year. Even the LTI student football club has found ways to win in the student league. So I have overdosed on Football, with another dose of United for early May.

Posted by Richard Stewart at 1:47 AM No comments: 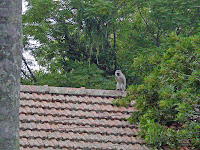 Check out the size of this squirrel I spotted on the roof of the kitchen this morning. Oh, it’s an ape.

The youth in my Sunday School Class said that I was getting too serious. So I’ll show you some pictures of the wild life and folks I met in . Limpopo is the of just south of , were they had elections on the 29th of March and they are still counting ballots today. It seems as if Mogabe the President will not be in power. They are predicting a run off election for President.

In Limpopo and other parts of , the youth have three weeks off from 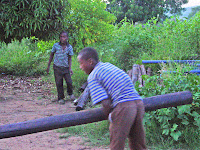 school for Easter break. The youth around the Farisani’s seemed to do a lot of work and play simultaneously. For the boys, there was grass to cut-to feed the goats, there were pigs to be fed-then slaughtered, fence posts to be loaded and then unloaded. For the girls there was food to be cooked Pap [pronounced Bop] a corn meal staple, there were chickens to kill and pluck and cut and cook, there were clothes to wash and then sun dry. It brought back memories of my childhood. Yuck. 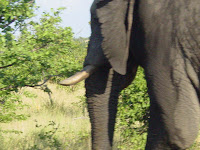 There are animals domestic and wild. Besides the pigs and chickens, there were goats, cows [please don’t hit either with your car] as they walk free on the road and graze beside the road. There were springbok, they are 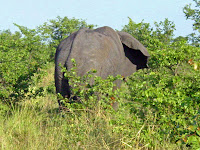 the ones with the curlicue horns; and zebra, they were too far from the road to get a good picture and then there were the elephants, they usually only gave you a picture of their best side. 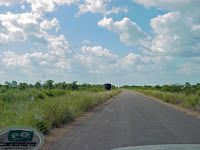 Magodonga, is beautiful. If you stand and face west to your left the land looks like a dry lake bed, flatter than a pancake. To your right are mountains, where at one resort/farm, they featured Rock Climbing, like you 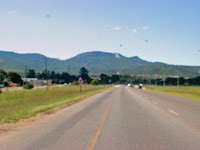 would do at or in the Southwest or like the commercial for the Marines.

T. Simon Farisani, an older brother of the LTI principal, is the Speaker of the Provincial Legislature of , he took us for a view of a development project that is based on a dam that created a 14 kilometer lake that is 60 feet deep and has crocodiles, hippo, and fish. The displaced villagers who had round huts were compensated by the government building them a house. If they had two huts, they got a two room house. If they had three huts, they got a three room house. You might get the message from the pictures. Enjoy. 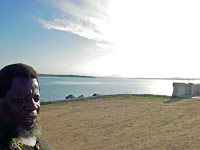 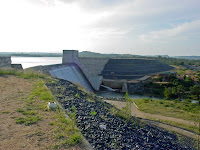 Posted by Richard Stewart at 11:56 PM No comments: