Rev. Harvey Davis, chose multiple paths to serve the Lord, both beginning and ending in the Lutheran Church. 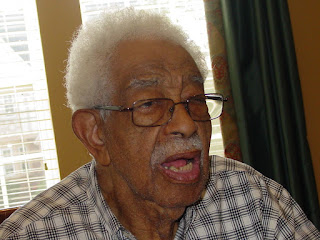 Harvey Davis is my fourth interview.  Harvey is the 'younger' brother of Rev. Louisa Groce, the third interview I've done.  (Though I had planned significantly more work being done over the summer, many of you know that I suffered a fall, infection, sepcis and four weeks of hospitalization while in South Africa.  After a med flight home, I spent one week in the hospital before 4 weeks in rehab and four weeks of home rehab, before getting back on the 'road' again.)  So please give Harvey some attention as he as a story of a journey of religious life and service, [LCMS-Synodical Conference as a youth, Reformed Episcopal priest, AME Minister, and retiring as an ELCA agency executive and pastor.]  October 2018 Update- Pr. Davis just published the story of his life at age 92,
IF GRANDMOTHER COULD ONLY HAVE SEEN.

https://soundcloud.com/tigerowl/harvey-davis
Posted by Richard Stewart at 2:11 PM No comments: